An overview of the direction of antenna

You might think that if we made the other dimension of the antenna larger (wider), how would the antenna change direction? In fact, that's the direction antenna what we're going to talk about today. When the antenna is widened horizontally, it becomes a flat plate; At the same time, the spatial wireless map is no longer a "doughnut", but has been squeezed into a gourd (theoretical form).

Since the back of antennas are usually made of metal, it can almost completely block the radio signal in the back part, and then the antenna presents a very clear directional irradiation characteristic. Take the directional antenna of 2.4G as an example. Let's give a few examples:

Since both dimensions of the antenna are compressed and the wireless energy is more concentrated, the antenna with the same gain is smaller than the omnidirectional antenna.This is a very important characteristic in engineering construction.

Common: The coverage effect is the same.

Difference: If use the omnidirectional antenna,need to set up a pole in the middle of square and offer power/fiber/cat5 which is different. If use a direction antenna, it is easy to install in on the building or telegraph pole nearby and offer power. 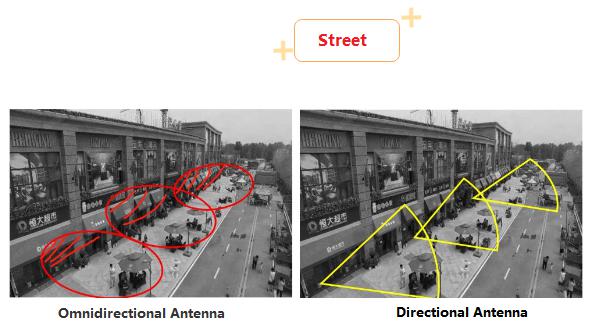 Common: The coverage effect is the same. And in long narrow street, the mounting point is also the same. You can install it on wall or pole in the street.

Difference: To reach the same coverage distance, the omnidirectional antenna need bigger size,and the back signal maybe disturbed by the building or other wireless signal. The wireless effect of outdoor high power AP will be reduced. But the direction antenna wireless effect is higher relatively.

Common: The coverage effect is the same. And in long narrow street, the mounting point is also the same. You can install it on wall or pole in the street.

Difference: Since the directional antenna has a better coverage in the front direction, it can reduce the construction requirements and the number of columns installed during batch deployment, as well as the requirements for power supply and cat5/fiber cable.

In conclusion, in addition to the usual areas, the non-directional antennas are not necessary.

For example, in some industrial parks, it is necessary to use directional antenna to solve the application of wireless bridge in the visual range between buildings.

In some indoor rppm with great height such as sports and exhibition venues,directional antenna is needed to solve the problem of high-density user access (reduce the interference between AP).

In some pipe corridor projects, the internal space is closed, narrow and long, and directional antenna is also needed to solve the wireless communication problem.

Dear friends, in the implementation of outdoor wireless projects, please try to use a variety of directional antenna, it will bring you unexpected surprises!